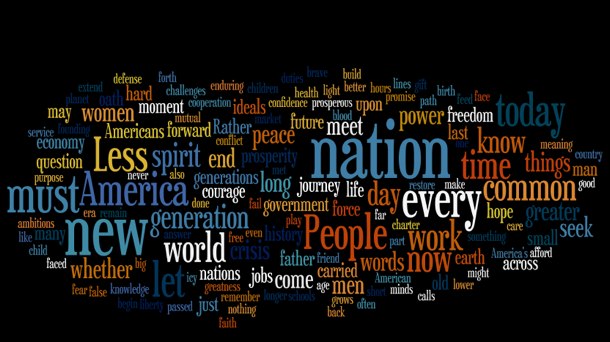 But what are word clouds, and how are they useful? Word clouds visually represent the frequency or importance of a word in a given text. In President Obama’s speech, we can see from the cloud that he used words like “nation”, “new”, and “people” fairly often. You can use them to compare to texts in in a sort of qualitative way – does one text have a much sharper distribution than the other?

I would say that most of the time their primary purpose is aesthetic. I’m not convinced people really use them for anything other than as nice design elements – thought I think they have untapped potential. That’s why I created the Tag Altocumulus WordPress Plugin, to try to integrate tag clouds into a site’s navigation system in a way that’s actually useful.

To generate the clouds they used Wordle, a very cool site that lets you create your own word clouds from any text.  Wordle gives you options on color, font, and orientation and you can end up with some pretty nice looking clouds. I went ahead and generated one from my paper on Tagging and Searching:

It does look pretty cool. Wordle also will generate a cloud from any site with an RSS feed. Here’s the cloud for my site:

Drop me a note in the comments below if you make one for your site or find an interesting text to use.

If you are a web developer or designer in the Cleveland area, I highly recommend dropping by the Cleveland Web Standards Association meetings. They just launched a new website, including a great aggregation of local web development blogs.

I started going to meetings last year and I have to say it’s a great group of people that host some really interesting discussions and speakers. And I’m not just saying that because they let me give a presentation a few months ago.

At the last meeting Eric Meyer took some photos – one makes me look really important: In the other, it looks like I dozed off in the middle of the discussion: Oh well. The group screened the film Helvetica, which is the best movie I’ve ever seen about a typeface. I’d recommend it for anyone who has an interest in design, typography, or even 20th-century history.

Since I’ve moved out of town I won’t be able to make it to too many meetings in person. I want to set up videoconferencing, anyone have any recommendations for web cams, software, or services? I’m looking for something that is extremely easy to use, since my parents want to be able to do video calls too. I’ve heard some good things about Skype. Any thoughts?

These are designs I made for the 2004 Liturgical Publications resource calendar. The finished
product was 12″x12″, printed at 100 lpi. The print run was about 1000 copies and they were distributed
across the Midwest.