I was on Good Morning America this morning, interviewed for a story about the many online work-at-home scams that are floating around the web these days. Here’s a link to the story on the web site, . Edit: I guess GMA’s urls don’t really work, the actual video at the link keeps changing. I even used their “link to this” button! I’ll try to find a more permanent url. I would embed the video for you here but unfortunately ABCNews doesn’t seem to allow embedding.

This is a very important story – these scams employ a number of social engineering techniques to seem trustworthy and they are tricking people who are desperate for work out of their money. The folks at GMA did a good job explaining the issue without getting too technical and confusing – please forward this on to anyone you know who’s wondering about schemes like these.

END_OF_DOCUMENT_TOKEN_TO_BE_REPLACED

When designing a user interface or doing a usability review of an existing website, simplicity is an extremely important goal. When I get to your interface, don’t force me to spend time thinking. Make it easy for me to do what I want to do.

Here’s a perfect example: ever wish you had remote controls that looked like this? 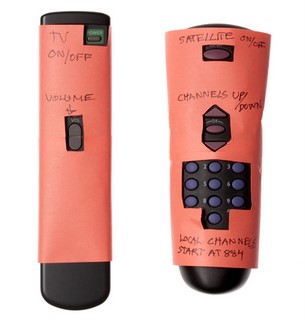 Like anything else, though, don’t take the drive for simplicity and turn it into an inflexible dogma. Make sure your UI simplification efforts stop before your interface is:

… so simple it doesn’t give users any cues. This is a classic Web2.0 sandtrap – yes, your site looks very modern and clean with one giant button, but what does the button do?

… so simple it doesn’t do what the user wants. Here’s a great example of oversimplification from Tim and Eric Awesome Show:

It’s great – users have expressed frustration in getting calls when they’re at dinner or trying to enjoy a relaxing round of golf – so they’ve taken away the ability to get incoming call. Problem solved.

… so simple that important efficiency gains are lost, requiring users to expend repetitive manual effort. The Cinco Fone example above fits this one as well, but here’s another fun satire from the Onion News Network about the Macbook Wheel:

I’d love to hear any example of websites that you think might be committing one of the three sins of over-simplicity, please add a comment below.

Also, ff the title of this post is familiar, it’s because it’s based on a quote often attributed to Albert Einstein. The actual quote is:

It can scarcely be denied that the supreme goal of all theory is to make the irreducible basic elements as simple and as few as possible without having to surrender the adequate representation of a single datum of experience.

I used Google Docs spreadsheets to pick a name for my baby. Here’s another interesting social use of spreadsheets.

It’s amazing what people will think of once you put something mundane up on the web and give people the freedom to work together.