Last.fm is  a great service – I’ve written about it before.  The best thing about it is the copious and collection of interesting data on music tastes (you can even see how geeky your taste in music is).

Like many other web sites Last.fm has a tagging system, and so it interesting to see how different tags relate to each other – are hip-hop fans more likely to listen to ambient or heavy metal?  One very cool way to do this is with a map.

See the orginal version here, complete with mouseover descriptions of the different islands.  Visualizing music tatses as a map makes some interesting findings pop out – the long continent of folk, psychadelic, and metal in the northeast, for example.  Deathcore and emo are on the same continent, just on opposite sides of what I call You-Don’t-Understand-Me-Dad Bay.

This is an alternative to more conventional tag cloud or word cloud representations, though I’m not sure which presents information more clearly.

Another thing that strikes me is the similarity to video game maps – perhaps because of the iconic color palate.  Though we might think of them geographically, video game maps are equally artificial ways to relate to a big pile of numerical data.

Artist Kentaro Nagai has used the continents (and major islands) as a medium to create the twelve signs of the Chinese zodiac.  See all of them here.

I particularly like the economy of arrangement in the rooster: 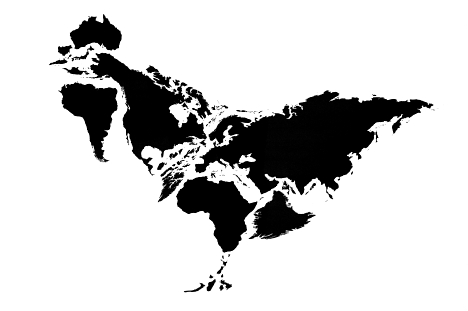 …and the sheep for it’s nice use of negative space. 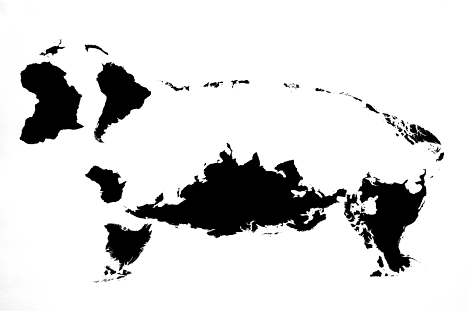 Thanks to Chris for the link to the Zodiac A while back I created a group on Last.fm for Geek Music. Geek music isn’t a real genre, but it seemed to me that geeks were fairly passionate about their music and might have some similar favorites. I’m not just talking about genre stuff like math rock, nerdcore rap, or heaven forbid, filk. What do programmers listen to when they program? What do bookworms listen to when they read?

Well, we have the answer. And now that we have some numbers, we might as well see some analysis.

So, how geeky are your musical tastes? Click here to find out.

I clocked in at 83.82% geeky. That’s pretty good – can you beat me? Either way, post your score in the comments below. Since the release of the iPhone 2.0 firmware and the App Store, I’ve been like a kid in a candy store. At some point I’ll get around to a list of recommended apps but for now I just want to compare two music listening / online radio applications: Last.fm and Pandora.

You do, of course, have many more options – the App Store Music category has about 30 apps listed, many of them designed to help you enjoy and discover new tunes. And you always have the built-in iPod functionality of the phone which syncs with iTunes on the desktop. But Last.fm and Pandora have been around for a while as very impressive web apps so those were the first two I decided to take a look at. They have very different approaches to recommending music with lots of data and cool algorithms.

Pandora is based on the Music Genome Project – basically, their system breaks down each song into a series of attributes. For example, Queen’s Bohemian Rhapsody has “demanding vocal performances, mild rhythmic syncopation, heavy use of vocal harmonies, a prominent rhythm piano part,” among other features. Give Pandora a song or musician and it will create a radio station of similar music. It’s really that simple.

As each song comes up you can give it a thumbs up or thumbs down and you can skip a few songs per station per hour. The iPhone interface displays the album art front and center with a button in the upper-right corner to show you why the system chose the song.

I’ve played with Pandora off and on for a while and my experience is that it does much better with stations created around one or two bands or songs than stations built on large lists of music you enjoy. Add 10 rock bands to your “Road trip with Steve 2008” station and if one of them has folk influences you’re bound to get some sleepy folk in there now and again. Give it just one band and it can get some amazing results – check out my Gorillaz station, for example.

The drawback to Pandora is that it only has very rudimentary data collection and social features. You can find other people listing to the same song on the website but user profiles are pretty sparse, and there’s no groups, message boards, etc. But if you just want to listen, and don’t want to bother with all that other stuff, Pandora provides a pretty great experience.

Last.fm builds radios stations for you and makes recommendations based on the listening data of thousands of other listeners, whether they’re using the Last.fm site, the mobile app, or a scrobbler plugin in their desktop MP3 player software. You can also listen to stations based around a single musician or band, but Last.fm gives you more options and better results the more you listen and participate in the social features of the site. For example, take a look at the listing for Bohemian Rhapsody – you can see top listeners, how users have tagged the song, similar songs, comments, message board posts, etc.

The user interface is actually quite similar to Pandora’s, with options to note that you love or hate a song, a skip button, album art, etc. You can see a bio of the band, similar artists, and upcoming events, which is cool in theory but I haven’t really used.

I’m a long time user of Last.fm from back in the Audioscrobbler days (check out the Geek Music group) and you definitely get more out of it the more you listen. You don’t really have to participate that much, just letting Last.fm know what you’re listing to improves recommendations and radio plays. My favorite thing about it is all the stats it collects. You can see which bands and songs you listen to most often and find out the most popular bands in Sri Lanka.

Compared to Pandora, though, the recommendations aren’t always as interesting… not bad, but I find myself pleasantly surprised more often while listening to Pandora. For comparison, listen to the Gorillaz similar artists radio station.

You can, of course, skip online radio altogether and just use the built-in iPod functionality along with iTunes on the desktop.  There’s a lot to be said for going this route – the interface is nice and usable, the iPhone holds a decent amount of music, and iTunes collects of the same listening data that makes Last.fm so cool.  Also, it will work no matter how conjested the local network is and doesn’t drain the battery nearly as quickly.

But you miss out on all the social networking features and it’s a lot harder to discover new music.  So I think of it more as a back-up plan…  guaranteed access to some of my personal music library.

Actually, there’s no need to pick one as the winner – they’re all available for use on your computer and your iPhone.

Have a favorite?  Share your experience in the comments section.