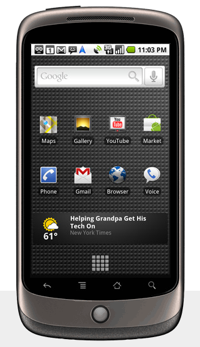 I’ve had a Nexus One for a few weeks and I can finally talk about it. It’s really nice – I’ve had a Palm Treo, an iPhone, and a G1 and this is definitely the best mobile device I’ve ever owned.

If you’re like me you’re probably tired of hearing about how every new phone is or is not an “iPhone killer.” To be honest, I really like the iPhone — I used to have one and my wife has one now. I’m not on the Android team, but I doubt they’re trying to “kill” any other devices – most Googlers like any mobile device with a full-fledged web browser.

That said, if you’re wondering which phone to buy, I think the Nexus One has the edge. Here are five reasons why:

1. The screen is really, really nice. This might sound a bit superficial, but the truth is I spend much more time surfing the web and reading than I do actually making phone calls. In my experience the higher the resolution, the less eyestrain. I also often use my phone to show people photos, and the Nexus One screen really does the photos justice.

I remember getting my iPhone and being amazed by the 480 x 320 pixel screen at 163 ppi. The Nexus One has a slightly larger screen, but much higher resolution, 800 x 480.

2. Voice input is awesome. Every time you need to type something, whether it’s an email, text message, or blog post, you always have the option of saying it. Today I texted my wife to let her know I was running late as I walked down the stairs from work – no need to look at the phone or spend time tapping out the message. That’s a pretty trivial example, but I find myself using it more and more in lots of situations just like that.

3. The video is actually adequate. This is the mobile phone I’ve seen that produces video that’s good enough to share with others. Here’s an example, and note that the lighting wasn’t exactly optimal:

We have a Canon video camera that we almost never use because it’s yet another device to lug around and getting videos off of it is a huge pain. I always have my Nexus One on me, and I can upload the videos directly to YouTube right after I take them. This means I’m getting a ton more video of my 1-year-old daughter and sharing it with family all around the country.

4. The photo gallery is nice, with great Picasa integration. I mentioned that showing off photos is a big use case for me, and the photo gallery is easy to navigate, fast, and looks cool too. It’s pushing me to use Picasa more even though I still prefer Flickr.

5. Multitasking is more useful than I thought. When the iPhone came out, I dismissed a lot of the criticism that it didn’t allow multitasking. How many different things do you expect to do at the same time on a small device? But as time went on, little task-switching annoyances started to add up.

I won’t run through all the possibilities, but my friend Wysz has a pretty good demonstration – he was able to get turn-by-turn GPS directions while listening to MP3s and streaming live video to the web. All on one phone. That’s pretty amazing.

Anything else? The Android Market is really starting to fill with cool apps, though it’s not quite as extensive as the iTunes App Store. I expect that to change as more people get Android phones. I wish I could write more about how developer-friendly the Android OS is, but I’m a bit ashamed to admit I haven’t made time to write a single line of code.

So, if you’re looking for a new phone, I completely recommend the Nexus One. If you really prefer a physical keyboard, take a look at the Droid, which has comparable specs to the Nexus One in a lot of ways. And honestly iPhones are still pretty cool, too, and I wouldn’t mind playing around the Palm Pre for a bit. This is the great thing about competition – right now we have a bunch of great mobile devices and mobile operating systems to chose from, and each is pushing the others to do better. If only we could say the same thing about the carriers.

If you have any Nexus One or Android questions, feel free to ask in the comments below.

6 thoughts on “Five Reasons To Get A Nexus One”